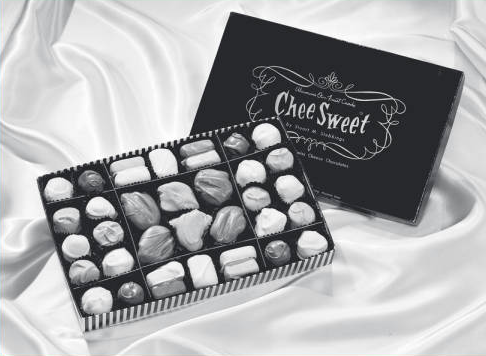 It was Thursday, November 1, 1956 in old De Pere¹, when news of Stuart M. Stebbing’s invention made his hometown newspaper. Stuart, a local lumberman, was a diabetic with an insatiable sweet tooth. His wife Bertha was a professional cook and nutritionist. Together, they concocted a recipe that combined Swiss cheese and chocolate, thereby reducing the sugar content by 40% so diabetics could enjoy an occasional indulgence as well. The recipe would later be refined by candy maker Harold Pieterson (of Milwaukee) and cheese chemist J.C. Tupper (of Plymouth). In time, it would come to be known as CheeSweet Candy.

Not only was it low on sugar, but the cheese also added protein to the treat. The candies came in a variety of flavors; cheese caramel, cheese pecan, cheese cransweets, cheese opera creams, and of course, cheese chocolate bars. All which ironically were said to have no cheese taste. The taste instead had qualities told to be “difficult to describe” as well as “different and delicious”.¹

Alice in Dairyland introduced the unique candy at the Wisconsin State Fair in 1955. Although invented by the Stebbings (of De Pere), the confection was manufactured in Milwaukee by the Maronn Candy Co. In 1958, at Chicago’s Fancy Food and Confectionary Show, CheeSweet was awarded finest candy.

Stebbings also served as the campaign manager for Senator Alexander Wiley. Together they saw CheeSweet as a potential boost to Wisconsin’s dairy surpluses. “The candy contains at least 50 percent more dairy products than nearly any other”, Stebbings was quoted, “Our purpose is to promote the sale of cheese necessary for the product and not to give any firm monopoly on its use.” Senator Wiley hoped for a federal dairy laboratory in Madison to dream up more dairy products and held up CheeSweet as a symbol of what was possible.

Over the years, heart shaped boxes filled with CheeSweet were sent as Valentines to Mrs. Richard Nixon, Mrs. Lyndon Johnson, and Mrs. Dwight Eisenhower. Mamie Eisenhower even sent a personal thank you note to the company.³ Despite all of this promotion, however, it seems the cheese filled candy never caught on. The CheeSweet Candy Company declared bankruptcy in October of 1960.

However, Stebbings didn’t stop with one cheese related invention. In 1958, he filed his first patent on his infamous cheese filter cigarette (later updated in 1960 and 1966).⁴ The filter would blend a grated cheese, either parmesan, romano, or swiss, with charcoal. The charcoal would absorb the cheese oils, preventing the cheese from spoiling. Stebbings claimed this new filter would remove 95 percent of the tar in cigarette smoke.

The cigarette filter was another attempt to help the Wisconsin dairy industry but I have found no reports detailing its production leaving me to doubt it was ever adopted. In the mid 1980s, a new corporation (based in Sheboygan) looked to relaunch Cheesweet⁵ but based on lack of info afterwards I don’t believe it ever gained traction. Stuart Stebbings died in 1985 at the age of 81. He is buried in Greenwood Cemetery in De Pere, Wisconsin. His cigarette filter patent has gained new life on the internet. Often added to lists of wacky or absurd inventions. Even wall art is available. The CheeSweet trademark lives on and was last renewed in 2007.⁶