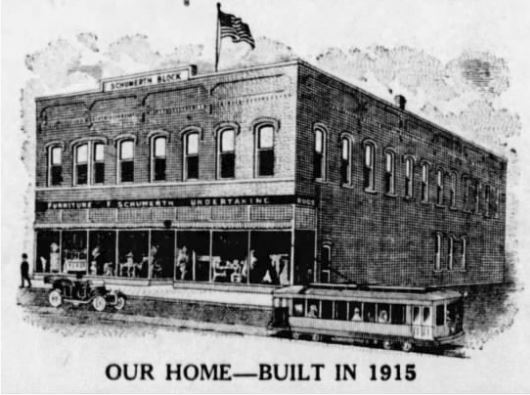 Schumerth furniture was founded in 1902, by cabinetmaker Frank Schumerth. Originally, located in the Baeten building (622 George St.), the company later moved to the Jackson building. After 12 years of growth they expanded to 100-102 S. Broadway in De Pere. The company incorporated in 1921, when Joe E. and H.E. Schumerth joined the organization and became stockholders.¹

Schumerth sold furniture, cabinets, and also operated as a funeral parlor; which was common for furniture stores at the time.

The company was a mainstay in De Pere for more than 66 years. Their claim to fame was they were the largest furniture store in any city in the midwest under 6000 in population.²

On April 24, 2019, a fire took down the old Schumerth building. Everyone was evacuated and no injuries were suffered other than a minor injury to one of the firemen. The brick building, as we know it, was 104 years old, with some sections dating back to circa 1885. Coincidentally, almost on the exact date of the 2019 fire, this location suffered a similar disaster. A fire destroyed buildings on the 100 and 200 blocks of N and S Broadway on April 23, 1882.³ History repeating, one day and 137 years later.

4 thoughts on “The Old Schumerth Building”